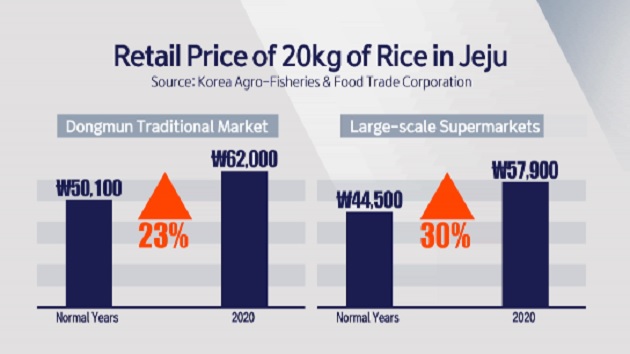 The price of rice is rising nationwide as this year’s rice harvest resulted in a low yield.
This lays an additional burden on households already hit hard by the pandemic.
Mike Laidman reports.

This restaurant in Jeju City features a very popular, and basic, food - rice in a hot stone bowl.
This year, high vegetable prices have already taken their toll on restaurants, and now, rice prices are set to follow.
And with consumption shrinking due to the pandemic, the owner cannot raise menu prices.

A long rainy season and back-to-back typhoons this summer are the main contributors to a rice harvest that is well below where it should be.

That’s the lowest amount produced in 52 years, going all the way back to 1968.
Now, rice prices are starting their inevitable climb.


As most of the rice consumed onar Jeju is imported from the mainland, local consumers have to pay additional transport and distribution costs.


Meanwhile, Seoul is planning to increase rice supply by releasing the rice reserved by the government for emergencies if the supply becomes insufficient.