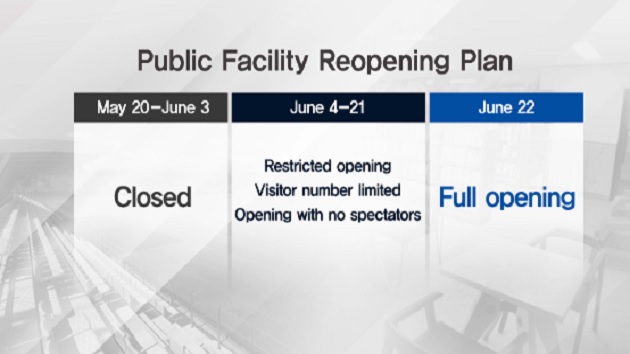 The island has joined the national government in easing their social distancing policies as of this Wednesday (May 20).
Public facilities including concert halls and gyms will gradually reopen beginning next week, meanwhile quarantine measures remain strictly in place at the airport and seaports.
Authorities are remaining vigilant as schools reopen and an infected person with no symptoms could still be a silent spreader.
Joseph Kim reports.


New COVID-19 infection cases have not been reported since the island's 14th case was confirmed during the late-April holiday in Jeju.


The province has relaxed its social distancing campaign.


Economic and social activities have resumed while quarantine measures are in place.

Public facilities including galleries, libraries and gyms will begin reopening from June 4th.

The facilities are now coming up with plans to reopen.
Reservation systems or restricting visitor numbers are being considered on a trial basis.
If the restricted opening proves to be safe, the facilities will fully reopen beginning June 22nd.


Passengers' temperatures are checked at seaports and the airport and the walk-through virus testing facilities will remain for the time being.

Tourists are advised to make a reservation before visiting tourist attractions and guided paths will be created at popular places.


The heightened current quarantine level will be kept at vulnerable places including community silver halls and nursing homes until June 21st.
The island is slowly going back to normal, but it's too early to breathe easy.


Authorities remain vigilant as schools have reopened and the infected persons with no symptoms could be silent spreaders.

In the coming weeks, all of the schools and public facilities will fully reopen, so the next few weeks will be a critical juncture to see if the eased social distancing is enough.