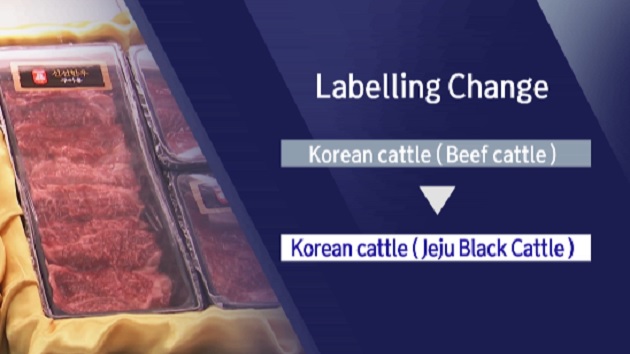 Jeju Black Cattle, the island’s indigenous cattle breed, is recognized as a superb brand of beef.
However, black cattle beef is not distinguished on the shelves of supermarkets, and they are simply labeled as Korean beef. Fewer cattle farmers choose the breed as the Jeju species requires a longer rearing period.
Local researchers have found specific genome sequences to distinguish the Jeju cattle from Hanwoo, which means the indigenous species can now be labelled as “Jeju Black Cattle” and become competitive in the market.
Mike Laidman reports.


Only a few farmers in Jeju have chosen to raise the species.
In fact, out of the roughly 36,000 beef cows on Jeju, fewer than 2,000 are the indigenous variety.

The Jeju Black Cattle take longer to mature because of the slower improvement of breed over time. This means that it also costs more to raise.


The cattle species goes through a strict accreditation process at each stage from a farm to a slaughterhouse. But in the end, it has been sold as normal Korean cattle.


But now, thanks to the efforts of researchers, "Jeju Black Cattle" will soon be what consumers see on store labels.


A research group led by (박세필) Park Se-pil, professor at Jeju National University, has successfully found the specific genetic sequences of the Jeju Black Cattle.
This enables stakeholders to identify and guarantee the species during distribution.

Meat produced from the cattle will now be labelled with its own name and variety.


Only Jeju Black Cattle is getting its own labelling name among five Korean cattle varieties, including the brindled cow and white cow.
Like the island's black pig, the cattle species will now have a little more of the spotlight on store shelves.

Moving forward, securing healthy and sound black cows is the priority for breeding programs, which will help the animals become more attractive, and thus more commercialized.