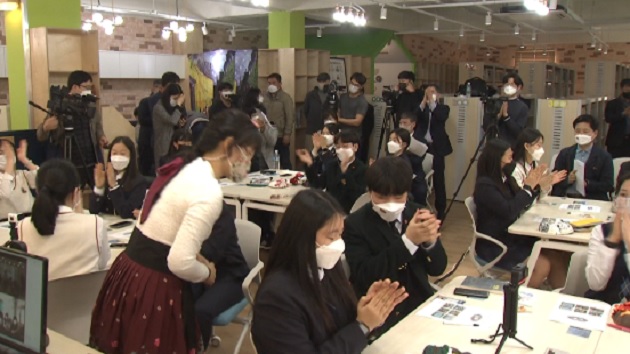 Students gathered for a joint history class.
Students and teachers from Jeju and (여수) Yeosu and (순천) Suncheon in South Jeolla Province shared their own tragic history in relation to the Jeju April 3rd Incident, and (여수)Yeosu-(순천)Suncheon Rebellion.
Joseph Kim reports.

20 students and teachers from South Jeolla Province as well as Jeju students.

When the Jeju April 3rd Incident broke out in 1948, soldiers in (여수)Yeosu and (순천)Suncheon were ordered to suppress the incident and execute some islanders.
But the soldiers refused the order, and the (여수)Yeosu-(순천)Suncheon Rebellion, or the (여순) Yeosun October 19th Incident started.
This is the topic for the joint class.
Students share their thoughts figuratively about the two incidents.

At the discussion, they concluded that they shared a similar tragic history and the two events are not separate.

Especially, bereaved families of the April 3rd Incident attended the class and talked about the horrors of the incident they witnessed.

The students from the island and the mainland also made a visit together to sites that keep a sad memory of the April 3rd Incident.