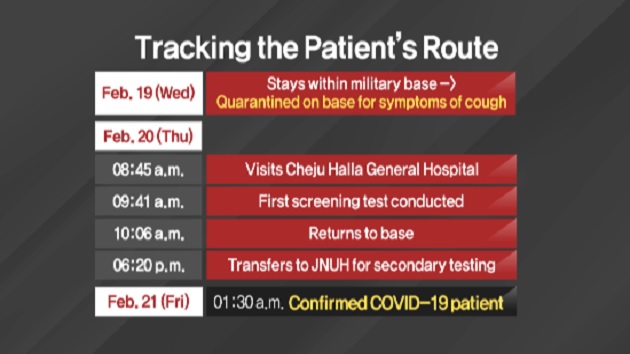 The first confirmed case of the COVID-19 virus has been reported in Jeju.
A male patient in his twenties tested positive on the 19th after making a trip to (대구) Daegu. He returned to Jeju on a flight with 140 other passengers.
He is being quarantined in Jeju National University Hospital.
Mike Balfour reports.

The first positive case of COVID-19 has been confirmed in Jeju.
The patient is a 22-year-old man in military service.

He flew from Jeju to (대구) Daegu on February 13th for his vacation and returned to the island on February 18th wearing a mask.

[slug] Transported from airport to military camp by taxi

After his arrival back on the island, he moved to the air force camp near the Jeju International Airport. Before returning to the camp, he dropped by a convenience store in front of the camp.

[slug] Quarantined on Feb 19 for itchy throat and cough

The patient was quarantined in the camp for symptoms of an itchy throat and cough on February 19th.

His first screening test was positive at the medical center at Cheju Halla General Hospital yesterday(February 20).
A second test done by the Korea Center for Disease reconfirmed the infection on the same day.

Won Hee-ryong / Governor
We have already completed quarantining the entire military unit and have disinfected the facilities on base.
We have also disinfected the taxi and convenience store that the patient visited and have ordered a temporary suspension of business operations.
The passengers who were on the same flight as the patient were also contacted and we have ordered the disinfection of the aircraft carrier as well as the self-quarantine of those who had contact with the patient.

The province is checking passengers who took the same flight with the patient. It was reported that there were 140 passengers on the flight.
[slug] Concerns on possible infection transmission during flight and while on base
There are concerns of possible virus spread while he was flying and staying at the military base.